Why Internet Explorer is Antiquated and Discontinued by Microsoft

We’ve had many customers ask about Internet Explorer and its compatibility with emerging technologies and websites.. We’ve written this article to elaborate on what’s transpired with IE during its rapid decline.

Now that Microsoft has discontinued Internet Explorer and replaced it with Edge in Windows 10, the organization is solely concentrating on its new browser, so moving clients to this version has become a priority.

Internet Explorer was one of the most commonly accessed web browsers, accomplishing a pinnacle of about 95% usage share amid 2002 and 2003. Its usage share has since decreased with the start of Firefox in 2004 and Google Chrome in 2008, and with the increasing popularity of operating systems such as Linux, OS X, Android and iOS that do not support Internet Explorer. On March 17, 2015, Microsoft reported that Edge will take place of Internet Explorer as the main browser on its Windows 10 gadgets. This definitely makes Internet Explorer 11 the last unleash. Essentially, all Internet Explorer versions preceding 11 will no longer get security patches and updates.

Microsoft has attempted, unsuccessfully, to get rid of the negative image of Internet Explorer over the past many years with a wide range of entertaining campaigns mocking Internet Explorer 6. The precipitous descending line of IE’s end is reasonably overlaid by the ascent of mobile browsers. The increasing utilization of smartphones flawlessly crosses Microsoft’s downstroke just as the expansion of Safari and Chrome’s upstrokes track it linearly. The promotional campaigns didn’t enhance the situation and Microsoft’s with a new age for the browser.

The Edge browser takes the place of the controversial and venerable Internet Explorer, but it is improbable that it will succeed the same prevailing market share as its predecessor any time shortly.

Microsoft has been caught up conducting its own set of battery test experiments meanwhile, to justify that chrome depletes your battery. 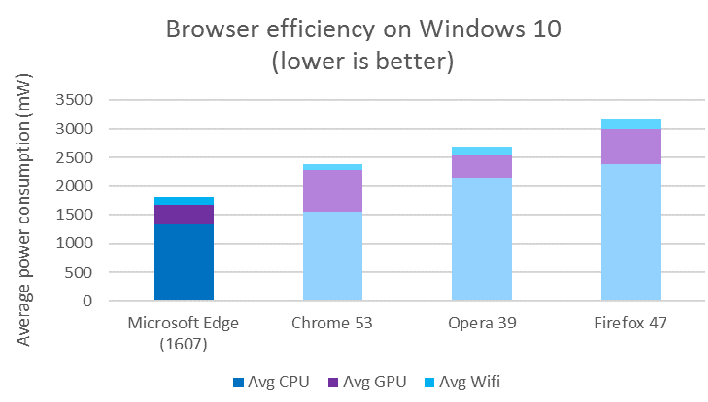 Microsoft has made two tests to quantify the power consumption by browsers: the first is an experiment in a lab-controlled environment measuring normal browsing behavior on well known websites, whereas the second test times what extent streaming HD video keeps going.

Microsoft’s lab-controlled experiments also demonstrate that Firefox, Opera and Chrome, all consume more battery power than Edge amid an automated cycle of accessing websites, opening new tabs, watching videos and scrolling articles. Microsoft is clearly trying to win individuals over to Edge, however, but the organization’s new browser still does not have a few features that you’d discover in Firefox and Chrome. With the Windows 10 Anniversary Update, Edge is more efficient and effective than ever, and the best decision for enhancing your battery life on Windows 10.

Microsoft has made their tests on four similar Surface Books that circled general activities individuals perform in a web browser. In Microsoft’s experiments, Edge endured 70% longer than Chrome, 43% longer than Firefox, and 17% longer than Opera.

The enhanced efficiency with the Windows 10 Anniversary Update mirrors various updates across the product, including improved networking, improvements to the app frame itself, more efficient flash, and improved background tab efficiency.